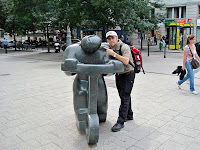 Bio: Growing up with a strange combination of Tom Clancy, Michael Crichton, JRR Tolkien, and JK Rowling probably gave birth to Seth Herman's YA/fantasy/thriller style of writing. After grabbing a bachelor's in computer networking, a graduate degree in education, and a rabbinical degree in... er... rabbinics, Seth turned his attention to writing. He sold two short stories in quick succession, and after working hard at his craft and putting in overtime on the querying circuit, he recently signed with Brittany Booker of the . His YA/UF novel, The Guardian Lineage, is going on submission soon.