Life is too short and too precious to waste.  There is no time to waste on pettiness or selfishness, nor is there time to waste on people who don’t understand this.  There is only time to enjoy the wonderful things life has to offer us.
Each time I come to this realization, I vow to appreciate life more and to reevaluate the things that I can change to make it better.  Then I find myself reverting back to my old ways and moving forward as before.  Today I am changing that pattern.  Every breath, every moment, could be my last-why not make them the best they can be?
But life is also scary.  It’s the uncertainties that make me pause and proceed with caution.  It’s the fear of the unknown and the fear of change that makes me hit repeat on my daily cycle.  Fear of rejection, fear of disappointment, I could go on and on.  They are all keeping me from charging through the door to my future.  My hand is on the knob, I just have to turn it-so why can’t I?  Why can’t I follow through with a vow I so badly want to keep?
With my history I know what I could be facing on the other side.  I’m a strong person, and I’ve been through more junk than ten people combined could handle.  I’ve taken a lot of hits and a lot of backs have turned on me when I’ve needed people.  I’ve been overlooked, under-appreciated, and treated badly for no reason at all.  And I’ve taken it all in stride, for the most part.  But truly, I’m the only person stopping myself from achieving my goals.  The real question is, am I strong enough to throw my fears aside and reach for the stars while keeping my feet on the ground?
Good riddance to bad rubbish and hello to my dreams becoming reality.  For those who are along for the ride, thank you, it’s gonna be a fun one.
I’m turning the knob and casting fears aside-I start work on my query letter tomorrow.
Posted by K.T. Crowley at 8:21 PM No comments:

Each night I’m going to bed later and later and my son is waking us up earlier in the morning.  You’d figure once my head hits the pillow I’d be out, but I’m more awake during the midnight hours than ever before.  Its not that I’m not tired or that I don’t want to go to sleep, it’s that I can’t.  I lie down and close my eyes and that should be all it takes, but it doesn’t work.  Instead my mind goes in to overdrive.
I think TOO much and I think ALL the time.  It’s always been both a good and bad quality about me.  I have to get things planned and organized and then I have to get those things done.  I obsess.  The problem is there’s a never ending list of to-dos, especially as a new parent, so once I think I’m getting to a point where I can relax, a whole new round of worries, issues and to-dos appear.  I’m also an over-achieving perfectionist and I don’t have a shut-off switch, so nothing can be (pardon my French) half-assed or put aside.
With this increased lack of sleep impeding my thought process, I find myself constantly asking “What was I just thinking about?” or “What was it that I needed to remember to do?” out loud, like someone outside my head can remind me what’s on my brain.  I can feel a crash approaching.
The Unnatural series I’m developing is so important to me.  I want it to succeed and I want readers to love it as much as I do.  With my head in a fog and my new office disorganized, it’s been hard to keep my thoughts and notes together the way I’d like them to be.  I had to think of a way to organize the dozens of scenes and multitude of dialogue I’ve written so far.  This is what I came up with: 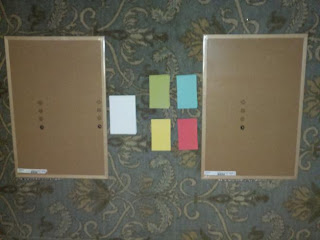 When all is said and done (and I finally tackle my office and finish it into a functional writing space), I hope to get some sleep, because this has been keeping me up at night.  There’s more to my master plan above, but I don’t want to sound like a total neurotic dork.  ;-)
I figured I’d show you so you can see how I’m developing the sequel.  I didn’t blog during the first novel’s process step by step and I’ve always been a fan of ‘behind the scenes’ info-it makes me appreciate the finished product that much more.  I hope at least some of you feel the same way.
One thing’s for sure, this time around I’m doing things much differently; for better or for worse will be determined soon enough by the end result.
Posted by K.T. Crowley at 10:50 PM No comments:

Here it is-hope you enjoy!

I looked down the long, dark hallway for an exit; I had to get out.  My spine tingled and my hands felt clammy.  I could see a slit of light at the end, light from under a door.  I ran full speed down the concrete hall, terrified for my life.

10 more until the next reward.  Wonder what it could be next time??  Don't forget, I'm up on Facebook and Twitter, and both are linked right here on this page to your right.

On a different challenge note, the 1000 followers challenge still stands.  March 31 is right around the corner, so make sure to tell your friends and family to follow if you want a chance to vote on the name of the sequel!

Ah winter.  You come in and trash the place with no apologies.  This winter in has been torturous to say the least.  Over of snow so far and we’re not done.  The snow banks are so high it’s been like driving through dirty clouds-you’re not sure what’s around the bend and you can only hope there isn’t a car or pedestrian there in your blind path.  Winter has made going up and down my steep, mountain-like driveway feel like bumper bowling; my car is the bowling ball and the driveway is as slippery as the lane.  Winter makes me become reclusive because the weather is so not worth the frustration.  But it’s , and year after year we gripe about this.  If we truly hated it, we’d have moved already, so I’ll end my rant.
Lots going on inside and outside of my head lately, both creatively and actually-a very mobile baby, a husband I rarely see thanks to his job and commute, issues with friends, family drama, and of course, the snow.  What does that mean for my sequel?  It means its taking a dark and crazy turn.
Not that I insert my real-life situations in my writing (I write realistic fiction, not fiction based on reality), but when I’m having issues or difficulties, it’s only natural my protagonist, Lexi, may suffer too.  Why?  Because she’s real to me, and all people have their issues.  I create issues to keep her real.  So if I’m feeling lonely and Lexi’s surrounded by friends and family, I don’t feel like I’m writing realistically.  I like to write close to my feelings, but only to the point where I can connect and relate.  When I read fiction, I still want to escape my own world and slip into the story, after all.
I don’t need my feelings to drive my writing forward (I can write a novel without an ounce of my feelings making their way in, like an actor can successfully portray a character without ever experiencing any of that character’s life or emotions as their own), but certain moods/emotions can help make a good story better.  If I get completely out of my own head, sure, I could write a whole realistic story based on rainbows and clouds and end it with happily-ever-after, but that would be boring to me.  I love real, visceral, believable stories.  And the same works in reverse.  If Lexi (or any protagonist I create) is experiencing something I may not have, I find a way to get to her level and feel how she feels in a form of method acting.
I believe Reality TV is hugely successful because people want to escape their own reality without leaving reality.  It’s also why tabloids sell and paparazzi exist.  We want to be immersed in other people’s lives and dramas, even when some of it is scripted to amp it up.  To end my babbling, I’m saying a big part of my creativity is intertwined with my emotions.  I’m feeling dark, lost, conflicted, raw and emotional, so if I start writing out my sequel today, it’s going down that same path-tons of (good) drama, raw emotions and dark, twisty mental places, very afflicted.  The scenes I’ve compiled and the dialogue I’ve written thus far can be in line with these feelings.  And I have a feeling my readers will love every word of it.
Music may inspire me, but my emotions drive me.
Posted by K.T. Crowley at 7:58 PM 1 comment: