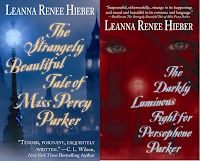 About THE STRANGELY BEAUTIFUL set: The Strangely Beautiful Tale of Miss Percy Parker and The Darkly Luminous Fight for Persephone Parker by Leanna Renee Hieber Limited Edition Hardcover of an OUT OF PRINT series due to the collapse of Dorchester Publishing. (Re-issuing from Tor/Macmillan in second revised editions.) Genre: Gothic Historical Fantasy, winner of 3 Prism Awards for excellence in the genre of Fantasy Romance, a Barnes & Noble and Borders bestselling series
What fortune awaited sweet, timid Percy Parker at ? Considering how few of Queen ’s Londoners knew of it, the great Romanesque fortress was dreadfully imposing, and little could Percy guess what lay inside. She had never met the powerful and mysterious Professor Alexi Rychman, knew nothing of the growing shadow, the Ripper and other supernatural terrors against which his coterie stood guard. She knew simply that she was different, haunted, with her snow-white hair, pearlescent skin and uncanny gifts. But this arched stone doorway offered a portal to a new life, an education far from the convent—and an invitation to an intimate yet dangerous dance at the threshold of life and death.

Bio: Leanna Renee Hieber is an actress, playwright and award-winning, nationally bestselling author of Gothic Victorian Fantasy novels including the Strangely Beautiful saga, the Magic Most Foul saga and upcoming Eterna Files (Tor/Macmillan 2014). A four-time Prism Award winner for genre excellence, her books have been translated into several languages and selected for multiple national book club editions. More at http://leannareneehieber.com , http://twitter.com/leannarenee and http://facebook.com/lrhieber She is serializing the finale of her acclaimed Magic Most Foul saga at http://leannareneebooks.blogspot.com
Leanna’s Website: www.leannareneehieber.com
Auction Terms: