The Write Stuff for Boston Auction Day 1
Item #4: A copy of CRIMSON AND CLOVER from Juli Page Morgan


You are bidding on:
·         A copy of CRIMSON AND CLOVER (winning bidder can chose to receive this book as a PDF or uncorrected epub ARC, or published book upon release via either Amazon or Barnes and Noble)
Opening Bid: $5
Auction Begins: Thursday 4/25 @ 10:00AM EDT
Auction Ends: Monday 4/29 @ 10:00PM EDT 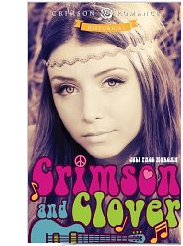 About CRIMSON AND CLOVER: When you’re the third of six kids, it’s easy to get lost in the shuffle, but Sunday Fowler is determined that this summer she’ll find the one thing that makes her stand out from her siblings.
And when she discovers a silver box in the basement of the library her parents are renovating, she might just have found something to gain her the attention she so craves. Inside is a series of letters addressed to “The Librarian” and a manuscript. But who wrote them? With the help of annoying neighbor-turned-new-friend Jude, Sunday is determined to track down the author. And when she unveils this novel to the world, she’ll be famous!
But uncovering this manuscript means stirring up secrets that some people in the town hoped to keep buried. And Sunday must decide if some things — loyalty, trust, friendship — are worth more than her name in the headlines.

Bio: After an exciting career in radio broadcasting, Juli Page Morgan was left with a passion for rock ‘n roll and memories of the outrageous antics and stories told to her by musicians and bands she’d interviewed over the years.  Inspired by these tales, Juli wrote her first novel, CRIMSON AND CLOVER, a romance set in in 1968.
Juli lives in small town in with her husband.  When she’s not writing, she’s remodeling their old house, recording voiceovers for TV commercials, and trying to convince her husband the world won’t come to an end if the television is turned off.  She listens to a lot of music at maximum volume and has never met a speed limit she didn’t exceed.  Juli’s an unapologetic lover of rock ‘n roll, Led Zeppelin guitarist Jimmy Page, and French onion dip, not necessarily in that order.  She’s currently at work on her next book, and yes – it rocks, too!
Juli’s Website: www.julipagemorgan.com
Auction Terms: