You are bidding on:
·         A signed paperback set of the TAME series (TAME A WILD HEART, TAME A WILD WIND, and TAME A WILD BRIDE)
Opening Bid: $10
Auction Begins: Thursday 4/25 @ 10:00AM EDT
Auction Ends: Monday 4/29 @ 10:00PM EDT
About TAME A WILD HEART: He's not her brother, but Duncan thinks Catherine sure needs one. A woman has no business trying to run a ranch. Not in 1880s . Even though she's loved him forever, she swears she doesn't need his help, but in between stampedes, fires and a kidnapping, the ex-bounty hunter and gunslinger becomes determined to do more than protect the ranch. Working together to catch a dangerous outlaw might just be the best thing that ever happened to them both.

About TAME A WILD WIND: Former Texas Ranger Sam Colter isn't looking for love.  Neither is pretty widow Cassie O'Malley.  But when a man stalking Sam for killing his brother kidnaps Cassie, Sam discovers it's more than duty that sends him racing to her rescue.  Will Cassie realize the truth about her own feelings before it's too late?

About TAME A WILD BRIDE: Rosie Stanton climbed on a west-bound train to answer his ad for a wife and mother, everything she wants to be.  But Tom Harris lied.  He doesn't want a wife, merely a mother for his two abandoned children and a cook and cleaner for his ranch.  Betrayed once, he's vowed never to let another woman into his heart.  Sexy Rosie upsets all his plans and threatens to invade his scarred heart.  How will he maintain his vow to keep his hands off her as she charms his children, his cow hands, his life? 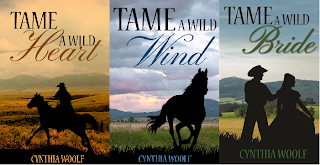 Bio: Cynthia Woolf was born in Denver, Colorado and raised in the mountains west of Golden. She spent her early years running wild around the mountain side with her friends.

She was and is an avid reader. Her mother was a librarian and brought new books home each week. This is where young Cynthia first got the storytelling bug. She wrote her first story at the age of ten. A romance about a little boy she liked at the time.
Cynthia credits her wonderfully supportive husband Jim and her critique partners for saving her sanity and allowing her to explore her creativity