The Write Stuff for Boston Auction Day 1
Item #1: A school visit, set of the NEED series, and a copy of DEAR BULLY from Carrie Jones

You are bidding on:


·         A school visit within the contenential United States (for the 2013-2014 school year)
·         A set of the NEED series (NEED, CAPTIVATE, ENTICE and ENDURE) books
·         A copy of DEAR BULLY
Opening Bid: $100 (This auction is available to US residents ONLY)
Auction Begins: Thursday 4/25 @ 10:00AM EDT
Auction Ends: Monday 4/29 @ 10:00PM EDT
About the NEED series: Zara White collects phobias like other people collect stamps. “It’s a lot easier to understand things once you name them,” she says. “It’s the unknown that mostly freaks me out.” But soon, Zara is plagued by new fears:- Fear of gold, glittery powder- Fear of something (or someone) she cannot see- Fear of mysterious strangers that want something from her- Fear of what it is they want- Fear of how they'll get it-In other words, fear of pixies. They live among us, hidden by a trick of the eye. They are dreadful and power-seeking. And they all seem to need something. Something from her. “Filled with nasty evil creatures, nail-biting action and heart-pounding romance, [and] written with an intense energy that electrifies each page.” --teenreads.com

About DEAR BULLY: A collection of personal stories from today’s top authors for teens and young readers. 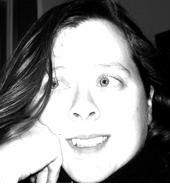 Bio: Carrie Jones is the New York Times bestselling author of the NEED series-which includes Need, Captivate, Entice and Endure -as well as Girl, Hero; Love (and Other Uses for Duct Tape); and Tips on Having a Gay (Ex) Boyfriend. She is the coauthor, with Steven E. Wedel, of After Obsession and co-editor of Dear Bully. Carrie lives in Maine with a scrawny cat, an obese cat, two tremendously large white dogs, and occasional pixies.