Item #2: A signed ARC of A SUMMER OF SUNDAYS and a signed copy of SCONES AND SENSIBILITY from Lindsay Eland

You are bidding on:
·         A signed ARC of A SUMMER OF SUNDAYS (MG fiction)
·         A signed paperback copy of SCONES AND SENSIBILITY (MG fiction)
Opening Bid: $10
Auction Begins: Thursday 4/25 @ 10:00AM EDT
Auction Ends: Monday 4/29 @ 10:00PM EDT
About A SUMMER OF SUNDAYS: When you’re the third of six kids, it’s easy to get lost in the shuffle, but Sunday Fowler is determined that this summer she’ll find the one thing that makes her stand out from her siblings.
And when she discovers a silver box in the basement of the library her parents are renovating, she might just have found something to gain her the attention she so craves. Inside is a series of letters addressed to “The Librarian” and a manuscript. But who wrote them? With the help of annoying neighbor-turned-new-friend Jude, Sunday is determined to track down the author. And when she unveils this novel to the world, she’ll be famous!
But uncovering this manuscript means stirring up secrets that some people in the town hoped to keep buried. And Sunday must decide if some things — loyalty, trust, friendship — are worth more than her name in the headlines.
About SCONES AND SENSIBILITY: Twelve-year-old Polly Madassa is convinced she was born for a more romantic age.
A time when Elizabeth Bennet walked along the stone halls of Pemberley, arm in arm with her one true love, Mr. Darcy.
A time with Anne Shirley gazed out at the wild seas off with her bosom friend, Diana, beside her.
A time when a distinguished gentleman called upon a lady of quality, and true love was born in the locked eyes of two young lovers.
But alas…Polly was born in twenty-first century .
This however, does not hinder our young heroine from finding romance wherever she can conjure it up. So while Polly is burdened with the summer job of delivering baked goods from her parents’ bakery to the people in her small beach town (how delightfully quaint!), she finds a way to force…um…encourage romance to blossom. Indeed, Polly is determined to bring lovers, young and old, together…whether they want to be or not. 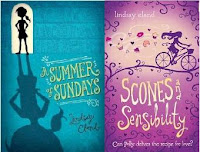 Bio: Lindsay Eland is the middle of three girls. Growing up, she often had to wait for the bathroom, shared a room and a bed with her sister, and sometimes felt forgotten, much like the main character of her upcoming book, A Summer of Sundays. (Even so, Lindsay has always adored both of her sisters.)
Lindsay grew up surrounded by hilarious, sweet, and sometimes unbelievable stories of her father who was one of six kids—stories that she tells her own children today, and many of which she draws on in her writing.
A Summer of Sundays (Egmont USA) will be released on July 9, 2013. She is the author of one previous novel, Scones and Sensibility.
She lives in Colorado with her husband and four children. You can visit Lindsay online at www.lindsayeland.com and follow her on twitter at @lindsayeland.
Lindsay’s Website: www.lindsayeland.com
Auction Terms: