The Write Stuff for Boston Auction Day 2
Item #7: YA Misfits Mega Critique Bundle and guest blog post from YA Misfits 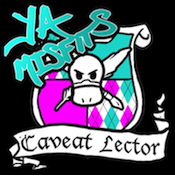 Bio: The YA Misfits are a group of YA writers at varying stages of the publishing process. We blog at www.yamisfits.com and tweet at @YAMisfits about writing, reading, the industry, and everything in between!
YA Misfits Website: www.yamisfits.com