About CALDARIAN CONFLICT: A corrupt government. Enraged pirates.  One monk caught in the middle of The Caldarian Conflict. Admiral Cain finds an elegant solution to Caldaria's piracy problem: lure pirate ships to decoy merchant vessels stuffed with explosives instead of treasure. The suicidal  captains are military men with fatal illnesses. The unsuspecting crews are poor men  enticed from the gutters of Caldaria with the promise of handsome wages and free  meals. Cain considers it a dual service--after all, he's protecting the merchants and  sweeping the streets clean of vagrants. There are only two problems: if the peasants find out, they'll revolt. If the King finds out, he'll have Cain's head. Accordingly, anyone with too much knowledge must die. Brother Mendell, a devout follower of Lord Justice, is caught in the crossfire when  he seeks retribution for an unfairly executed prisoner. After discovering the first few layers of Admiral Cain's plan, Mendell realizes that even a monk must carefully navigate through these dangerous waters. Mendell soon finds himself pursued by Admiral Cain's merciless assistant, Krell, who suspects that the monk might ruin their ambitious plan and uncover their mysterious backer--and will gladly kill the monk to keep him silent. Mendell must unravel the mystery before he, too, becomes a casualty of The Caldarian Conflict.  Will appeal to fans of Brandon Sanderson, George RR Martin, and R A Salvatore. 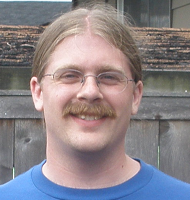 BIO: Mike Kalmbach grew up in a forest near . Spending his summers chasing wizards and fighting battles with evil ogres, Mike has always had a creative mind. He'll often share stories from his past, and some of them are even true. After life dragged him from childhood, Mike moved into freelance editing, helping other authors improve dozens of stories. He leads the Rochester MN Writing group and often speaks on topics from writing and editing to engineering and robotics.  Luckily, Mike now has two sons, so he has plenty of excuses to set down the pen and play. He lives in where he can still be found battling ogres, dust bunnies, and evil military leaders.
Mike Kalmbach’s website: http://mikekalmbach.com