About TREE SOLDIER: In the worst of times, good intentions go awry. One mistake can ruin a life. One mistake can transform it.
A government forestry camp set deep in the mountainous forests of the might not seem the likely place to find redemption, but in 1935, Park Hardesty hopes for just that. Blaming himself for the fiery accident that caused his brother's disfigurement and the death of the bootlegging woman he loved, planting trees, building bridges and mentoring tough, homesick boys brings him both penitence and the renewal of his own self-worth. When he wins the love of Kate Alford, a local naturalist who envisions joining the Forest Service, which allows only men, he also captures the ire of a camp officer who refuses to let her go. Just when he is ready to seek his brother's forgiveness, he is falsely accused of rape. Every aspect of his life he has tried to rebuild is put in jeopardy. In the end, the only way he can defend himself is to tell the truth about his brother, but he risks being kicked out of the camp. Worse, he could lose Kate's love forever. 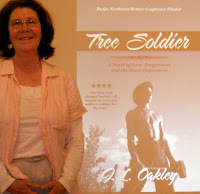 BIO: Janet Oakley grew up in , listening to her mother's stories of life in early 20th century . Several of them were about the boys from "New Joisey" occupying a side camp up the creek from her uncle's ranch. Desperate boys from back East, they were members of the Civilian Conservation Corps doing reclamation projects in the rugged area of the .

A long time resident of , Oakley's award-winning essays have appeared in the Cup of Comfort series. Her historical writings have appeared in various magazines, anthologies, and other media including Historylink.org, a "cyberpedia of history." She writes and presents historical talks and workshops on 19th century folkways and the CCCs. In 2006 Oakley was the project coordinator for a History Channel grant. That same year, she won the top non-fiction prize at the Surrey International Writers Conference in , B.C.. Tree Soldier, set in 1930s in the North Cascades, is the 2012 EPIC ebook Award winner for historical fiction and grand winner for Chanticleer Book Reviews.